The Case of the Mysterious Traveling Wilburys Guitar Picks

The guitar picks of legendary supergroup The Traveling Wilburys (TW) are part of long and mysterious history of musicial pseudonyms first used by The Beatles; a tradition that dates back well before they were famous. Aside from the near impossibility in locating a complete set of these TW picks, they contain only fictional names of the band members and their friends. Searching for authentic Wilburys picks with the real band member names will yield a dead-end because they simply don’t exist. Who are Nelson, Otis, Lefty, Lucky and Charlie T. Jr., and just how did these picks come about?  How valuable are they to collectors? Read on...

Historically, the pseudonyms used by The Traveling Wilburys were not the first ones ever used by group founder George Harrison or "Nelson Wilbury" as he is sometime known. In order to better understand the rare and unique nature of TW guitar picks we need to travel backwards in time to the 1960s to discover where George and his “first band” came up with the idea for pseudonyms.

Prior to this tour, John, Paul and George decided to create pseudonyms for themselves along the way. This was the first documented use of pseudonyms by The Beatles. George Harrison changed his name to Carl Harrison, no doubt in tribute to his rockabilly hero (and future friend) Carl Perkins. McCartney selected Paul Ramone as his nom de plume and Lennon of course, was Long John Silver. At the time, it was all in good fun. However, as time went on the group (and later as solo artists) began to use pseudonyms for various creative and business purposes.

Paul McCartney was a big fan of pseudonyms and continued to use them throughout his career. In the middle 1960s he used the name Bernard Web to disguise his authorship of the song Woman

for the British pop singing duo Peter and Gordon.

His intent was to see if the song could reach the top of the charts without the help of a Beatle, standing merely on the merits of the song and the performance of Peter and Gordon. In 1967, McCartney produced an album for the Bonzo Dog Doo Dah Band (The History of the Bonzos)

under the name Apollo C. Vermouth. This time the intent was to help musical friends on a rival record label, due to record contract obligations that would have prevented his assistance to the band.  Again in 1967, McCartney came up with the concept and pseudonym - Sgt. Pepper's Lonely Hearts Club Band

- to help free the group to create their latest album outside the confines and expectations of using their Beatles moniker.

George Harrison continued the use of pseudonyms in the late 1960s. In 1969, Harrison released an experimental solo LP on the Apple Records/ Zapple label called Electronic Sound

. On it, he secretly credited himself as Artur Wax. On a brief liner note he poked fun at himself with the line “There are a lot of people around, making a lot of noise, here’s some more.”

Throughout the late Sixties and into the Seventies, George Harrison continued to use various pseudonyms to let fans know he had played sessions on the albums of other artists. This use of pseudonyms was meant to get around entertainment attorneys who had yet to figure out how artists exclusively signed to their labels could be loaned out to work on albums for artists on rival labels. Additionally, George likely did not want his friends to be invoiced by his label for lending his talents. The list of names used by Harrison during his solo career is long and humorous: George Harrysong; George O’Hara; Son of Harry; Harry Georgeson; P.Roducer; Jai Raj Harisein; L’Angelo Mysterioso; and a few more. In a future article of the Rock And Roll Detective Blog, we will further explore the "anonymous" sessions of The Beatles working on other artists' sessions.

The birth of The Traveling Wilburys was an organic happy accident. In mid- 1988, Harrison had recently recorded the album Cloud Nine

, produced with Jeff Lynne. Warner Bros. Records' International Department had asked George Harrison to come up with an extra track for Europe for the single This Is Love

. At the time it was customary to couple an A-side with a never-before-heard track, giving the single extra sales value.

Lynne and Harrison were out to dinner with Roy Orbison that night. Lynne was currently producing an Orbison album. Orbison and Harrison were old friends from 1963 when Roy and The Beatles toured England together. They discussed Harrison’s need to record another song. When Lynne informed Harrison that one could not find a studio on such short notice, George said, “Let’s call Bob (Dylan). He has a studio in his garage.” The next day, after Harrison picked up his guitar on loan at Tom Petty’s house (Tom recalls: "I wondered what I was going to do today")- all five rock and roll legends found themselves hanging around Bob Dylan’s garage, helping George craft his "b-side”.  Once Handle With Care

was written, George figured, no use wasting all this assembled talent, and put them to work sharing lead vocal duties. No doubt Harrison and Lynne realized they had formed the group they often joked about during the Cloud Nine sessions. A group they referred to early on as “Trembling Wilburys”.

Of course, when the record label heard “Handle With Care” and found out who was on the song, they suggested Harrison form the group and record more songs. Thus, The Traveling Wilburys were born.

As plans for the new group and album were being made, Harrison started to create a logo, and funny names that ended in Wilbury. George recalls, “Somebody was making these guitar picks and they said, ‘What should we put on them?’ Everybody has some smart little thing written on the pick. So, as we’d just been talking about these “Trembling Wilburys”, I had it misspelled on the guitar pick as “Travelling Wilburys”. But at that point, it was just a drunken thought at the back of my head.” 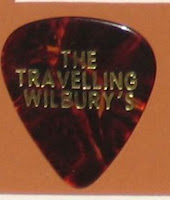 As George was creating an extended mix of his hit single “Got My Mind Set On You” the first Traveling Wilburys guitar pick surfaced. During this session in which Harrison used a borrowed red Hamer guitar to record a solo for the mix, engineer Bill Botrell says,  “We were sitting around, and George said, ‘Yeah, I guess we are going to have a group or something.’ Then he handed me a Travelling Wilburys guitar pick.” 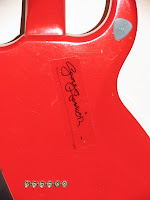 Indeed, George’s “group or something” formed and each Wilbury came up with their own Wilbury name for the band and for their pick. The first album was titled Traveling Wilburys Volume 1. The picks with their pseudonyms are listed below: 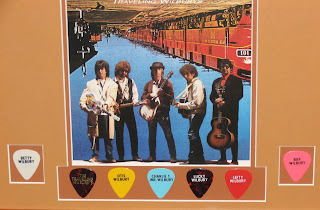 was recorded a couple of years later, the band members again gave themselves new monikers, however, no Volume 3 picks ever surfaced. This author requested a Traveling Wilburys pick (through a mutual friend) from Jeff Lynne after Volume 3 had been released. Although Lynne didn’t have one, he did provide something even more rare… Lynne said, "I haven't got a pick, but (pulling it out of his pocket) will this do?" It was a golf game-used  “Clayton Wilbury” golf tee, which, I suppose one could use as a pick. 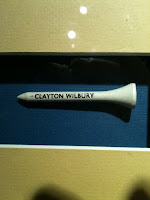 Though no Wilbury picks have surfaced for Traveling Wilburys Volume 3, here are the names each band member used in the album credits:

Harrison did have other picks made during The Traveling Wilburys. They are listed and shown below. Unfortunately, we don’t know who all of the true identities are at this point. The author asked drummer and Traveling Sidebury, Jim Keltner about Ken, Biff, Betty, Gladys and Cyril Wilbury. He laughed and said, “Some of those picks may have had no meaning at all. The guys would just sit around and think up so many Wilbury names that just made them laugh.” For now, the mystery continues.

The Traveling Wilburys official hardcover book http://www.genesis-publications.com/the-traveling-wilburys/ by Genesis Publications was published in 2009 and contained one photo of all the picks.


To say that these original picks are hard to find is an understatement. The Wilburys never toured, never appeared as a group in public and gave out their picks in very small numbers to their closest family and friends. And that was over twenty years ago. Today, some of these picks individually sell for $1,000 or more. And in fact, a complete set showed up on EBay http://cgi.ebay.com/Traveling-Wilbury-Beatles-Dylan-Guitar-Pic-Pick-Picks-/320573173551?pt=LH_DefaultDomain_0 for $74,000 in August, 2010. But then, no one said collecting is easy. Rather, it is a life time pursuit and passion. In the words of Nelson Wilbury, “Keep on traveling folks.” 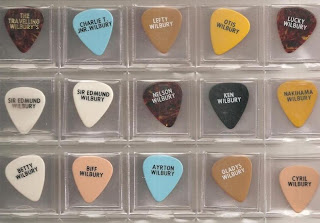 Posted by Rock And Roll Detective® at 7:54 AM