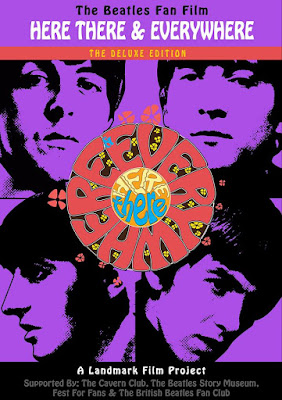 HERE THERE AND EVERYWHERE, THE BEATLES FAN FILM GOES INTO PRODUCTION!

Production starts later this month on ‘Here There & Everywhere’ [HTAE], a landmark documentary film project, supported by The Cavern Club, The Beatles Story Museum, The Hard Days Night Hotel, The Fest For Fans, Abbey Road on the River and The British Beatles Fan Club, and many others.

The film, shooting throughout this year and released in the summer of 2018, is an 80-minute ‘love letter’ spanning the band’s history as seen through the eyes, felt through the hearts and as told through the memories of the fans . . . from those who organise the fan
festivals and tribute concerts . . the Club and event runners who keep the fans together, the memorabilia collectors who amaze and delight with their rare and unseen photographs and films. . . to the authors who continue to breathe fresh life into the never-ending magical mystery tour.

HTAE pays homage to the global family, showcasing their
contributions towards fuelling The Beatles eternal flame. HTAE is The Beatles story as told by the fans and an important part of The Beatles future archive legacy!

Many artists and bands will pack HTAE with performances. And special licensed recordings will also be produced, featuring
musicians and vocalists from around the world, creating a global Beatles soundtrack. The film will also feature a “surprise” finale, to be announced over the months ahead.

The film will be launched at a number of iconic venues after
release, with a TV broadcast release at the conclusion of the project.

The team behind the film

David L Simon is one of the two executive producers. He launched and managed Disney International Television Productions, was head of DreamWorks Television Animation under Steven Spielberg, and was vice president of programming for Fox Television Stations. David is also a lifelong Beatles fan

Contributors to the PledgeMusic campaign will receive a signed DVD of the movie before the launch. Those who pledge for the DVD offerings will also see their name on the film’s credits, if they pledge during the campaign.There is also a more extensive Deluxe collector package available, plus preview, edit suite and launch cinema tickets.

To reserve your DVD copy and see your name in the credits go to http://www.pledgemusic.com/projects/the-beatles-herethereandeverywhere to be part of the family making this film. The campaign starts February 9!

*Please note this film is completely independent of Apple Corp and The Beatles. It is not an official product of Apple Corp, or passing itself off as such.

POSTSCRIPT: The Rock And Roll Detective has been asked to participate in the film. Looking forward to helping out.