Do you remember that feeling when you were a teen or in your early twenties and you had just discovered a new band before all your other friends? Remember the thrill of hearing a band like Steely Dan for the first time, which mashed together jazz, blues and rock and did it so cool that you couldn’t wait for the next release? Or for you really old boomers, can you recall the thrill of being turned onto Low Spark of High Heeled Boys

(Traffic) for the first time?

Well, that is the feeling I got recently when I checked out a new album by a group of veterans who call themselves Bandallamas. Syllabification: (band-a-llamas).

Their web site (www.bandallamas.com) describes the band as “a diverse group of nomadic master artists, of the genus Lama; sometimes seen adorned in vibrant blue-fleece; musical modulations and vocalizations have been known to cause uncontrollable foot movement… as revealed by the ancient auricle at a gathering of seers, sages and soothsayers - now known as a jam session.”
The Bandallamas are an eclectic group of rockers, blues and jazz vets who somehow found each other stretched across the US from LA to Denver, and Madison to Chicago. Their music incorporates tribal beats, reggae, blues, jazz, funk, rock, and more; transporting their audience through an all-embracing sound of an irresistible world beat. This eclectic group of artists transcends categorization (in the tradition of Traffic

and Steely Dan), while creating their own unique spirit of sound. These musicians are transporters of the vibe - through the legacy of the ages; the essence of musical spirit and origin - music's very roots.
Some of my favorite tracks include: I Love You

(takes me on a ride to New Orleans in the style of Little Feat); Trout Fishing

(the coolest jamming since Derek & the Dominos, featuring the most amazing bass guitar duel ever recorded along with amazing percussion and drumming); Eye to Eye

(shades of Lonnie Brooks). This is the The White Album

of R&B, blues, jazz and rock, and yes it is a double album with musical surprises hiding around every corner. 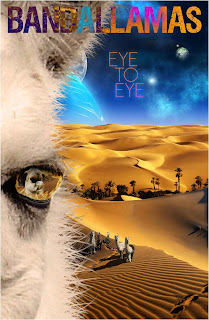 The Bandallamas album also features a plethora of guest artists as well. The album, which is entered for Grammy Nominations in the Rock category for Best Album and Best Song, features the following artists:

Chris Aaron is a rock and blues guitarist as well as a soulful singer, prolific songwriter, and masterful record producer.

Victor DeLorenzo has been in front of world audiences as both an actor and musician for over 30 years. He is a founding member of Violent Femmes

Jane Wiedlin stumbled upon the burgeoning LA punk rock scene in the 1970s, when she and Belinda Carlisle were inspired to form The Go Gos. Wiedlin continues to record as well as star in VH1’s hit TV series The Surreal Life.

Bobby Bryan has been captivating audiences with his brand of “urban blues” for the past 20 years. He is a well-seasoned guitarist who has played with the likes of Keb Mo’, Lowell Fulsom, King Ernest, Louie Bluey, Mickey Champion, Ray Bailey, Joe Houston, Zac Harmon, Deacon Jones, Finis Tasby, and Guitar Shorty.

Richard Davis is an international performing musician and Professor of Bass (European Classical and Jazz), Jazz History and combo improvisation at the University of Wisconsin-Madison. Some of his performance / recording credits include Sarah Vaughan, Frank Sinatra, Barbara Streisand, Miles Davis, Thad Jones/Mel Lewis Band, Dexter Gordon, Ahmad Jamal and a host of other notables.

Rob Wasserman’s daunting versatility has made him one of the last two decade’s most in-demand bassists. (That’s right this band has the two best bass players in the same band! Wait till you hear them duel on this CD!) Wasserman has lent his touring and recording versatility to the likes of Lou Reed, Van Morrison, and Elvis Costello. His longtime creative partnership with Grateful Dead members Jerry Garcia and Bob Weir have yielded a trove of fertile sounds. And don’t forget his solo works!

Ken Saydak has enjoyed a nearly forty-year career as a musician, writer, vocalist, and producer. His work as a pianist and organist on over fifty albums is well known to include collaborations with Johnny Winter, Otis Rush, Willie Kent, Lonnie Brooks, John Primer, Mighty Joe Young, Billy Boy Arnold, Sam Lay, Dave Specter, James Wheeler, Tad Robinson, Lurrie Bell, Johnny B. Moore, and more.
Last, but certainly not least, is my old buddy and percussionist extraordinaire, Pauli Ryan.
Pauli Ryan, a “seasoned veteran”; has recorded studio tracks for such well-known artists as Garbage and U2, and has appeared live with Luther Allison, Michael McDonald (Doobie Brothers), Sun Volt, Clyde Stubblefield (James Brown) and Buddy Miles to name a few. You can read more about Pauli Ryan in an article I wrote about him in Musician magazine (see below).
In closing, if there is one “new” music CD to pick up or download this year it is Bandallamas! Just like in the good old days, you will be able to buzz to your friends that you have discovered the best new album and artists of 2010. Only now you will probably be using that new-fangled technology like texting and Facebook… 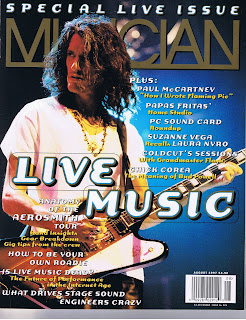 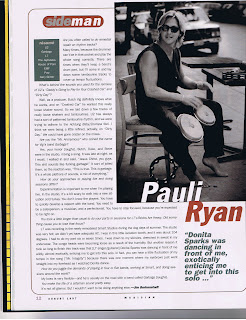