June 3, 2014, marks the 49th Anniversary of Jimmie Nicol’s rehearsal with The Beatles at EMI Studios (later renamed Abbey Road) in London. Nicol had been called by Beatles’ producer George Martin to come down to the studio. Martin had never met or worked with Nicol at this point, contrary to inaccurate online reports like Wiki.

When he got to the studio, Nicol was bombarded by media photographers and newsreel cameras that had been tipped off by Georgie Fame’s publicist. Nicol was the drummer in Georgie Fame and The Blue Flames at the time.  After the media got their photos and a brief film clip of Nicol bashing out a beat, surrounded by John, Paul and George, they were ushered out of Studio 2.
John Hodkinson, a friend of Nicol’s, came along and witnessed the session which was not recorded on tape by Martin. He recalls, “I basically sat in a corner and watched The Beatles rehearse each song with Jimmie.  Even though I was a fellow musician, I was excited to be there.  It was absolutely tremendous – I actually witnessed a private little show… where they just got a feel for each other musically.”

The details of the day that changed Jimmie Nicol’s life forever, can be found in the new Beatles book, The Beatle Who Vanished by Jim Berkenstadt, available at www.thebeatlewhovanished.com . Signed copies are available via Paypal and links to Amazon.com worldwide are also at the author site. 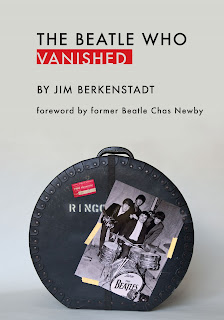