Jimmie Nicol was a fast rising drummer in late 1963 London. He would soon be recruited by his trumpet-playing friend Johnny Harris into the elite "club" of recording session work. However, on November 22, 1963, Nicol and Harris were taking a cigarette break from a Big Band show in London when their world was turned upside down... 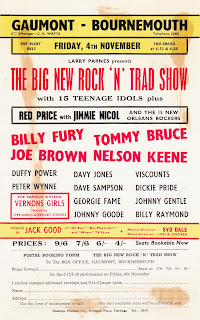 This is an excerpt from the Amazon Best Seller The Beatle Who Vanished, now available at Amazon in Paperback and as a digital eBook download to any Tablet, Smartphone or PC.


Harris was intrigued by a Rock and Roll drummer who could also play Jazz and Big Band as well as read music. At the time, this was quite uncommon, for players usually picked a field of expertise and stayed within the genre they had chosen. “He was so good,” says Harris of Nicol’s drumming. “And he was as good at Rock and Roll as he was with the jazz music.”[i]  “The songs we played were live with Cyril’s band. They were songs the band had recorded earlier in the 1950s. We just toured around England.”[ii]
By 1963, Nicol had played so many gigs on his old Trixon drum set that it was time to upgrade to a new one. With the steady earnings he was pulling in, Jimmie was comfortable springing for a new, flashier Trixon Luxus set in blue “croco”.  It featured a shiny blue set of drums with a crocodile skin-type design that was an instant eye-catcher.
Jimmie not only wanted his playing to be the center of attention, but he also wanted the eyes of the audience on his kit![iii] 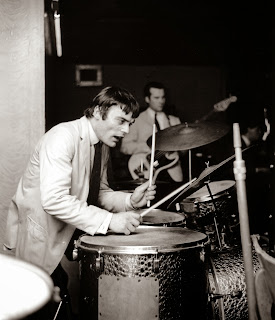 An event, not easily forgotten, happened one night between Nicol and his trumpet playing pal Johnny Harris. Harris relates the story: 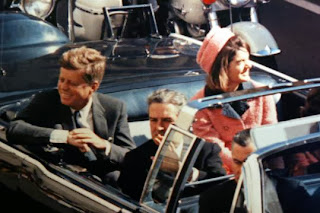 "I’ll never forget one night we were playing at the Lyceum Ballroom
near Covent Garden. It was November 22, 1963. The room was a converted movie theatre they had turned into a ballroom in those big band days. And it still had a back stage door. Jimmie and I walked out during a break in the show to have a cigarette and this stage door man said, ‘Hey, have you heard the news?’ And we said, ‘No, what?’ And he said, ‘President Kennedy has been shot dead.’ We just stood there in silence. We were dumbfounded. It was a terrible shock. So we just wandered around the street hardly talking to each other. We’d just look at each other and shrug our shoulders. It was awful. But you know, that night we just went back and did the job and continued on. But I will never forget how we shared that moment together."[iv]


The moment of sadness and regret shared by these two Big Band musicians created an even greater mutual bond that night. The tragedy in America had deeply impacted these two young British players.  Many Brits and Americans at the time had high hopes that the Kennedy presidency would usher in a new era of peace and prosperity. The friendship between Harris and Nicol was solidified as they shared this trauma together, and wondered about the future. Their professional collaborations would soon become even more intertwined, for both musicians were hurtling ahead at light speed toward new career opportunities looming in 1964; a year that would prove to be Jimmie Nicol’s watershed moment as a drummer.