album was yet another milestone in their amazing recording career. The album followed the more acoustic and folky Rubber Soul

album of the previous year.

Many observers of the era believe that Revolver

ushered in the psychedelic era of rock music. Critics point to the many sonic innovations found on the album. Just a few significant examples include: the mariner-like sound effects on Yellow Submarine; the backwards guitar riffs of I’m Only Sleeping;
George Harrison

’s use of sitar on Love You To; and the vari-speed noise effects and seagulls mixed with the “Dali-Lamitization” of John Lennon’s voice, all with a lot of innovation from Beatles’ recording engineer Geoff Emerick.
During the recording of the album, John Lennon called their old friend from Hamburg days, Klaus Voormann. Klaus was, and is to this day, a multi-dimensional artist who has worked as a photographer, graphic artist and bass player. “We had seen his drawings,” says Paul McCartney. “And we always liked his style and it was like, ‘Would you see if you can come up with a cover’. I’m not sure who asked him.”  “John called me and said, ‘Klaus, do you have an idea?’” recalls Voormann. “He asked me to come to the studio and listen to the tracks.  And I was overwhelmed. It was so beautiful; again, another step in a new direction. It was really mind-blowing and groundbreaking, and that’s what I was trying to capture on this cover.” 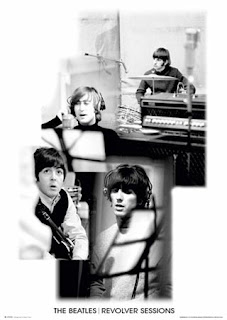 The resulting cover was part photo collage and part intricate ink art drawing of the four Beatles. The photos used were in part from Robert Whitaker’s recent photo session outtakes. Whitaker is famous for his controversial “butcher cover” photo that was originally released on the American Capitol Records “Cobble-ation” Beatles album called Yesterday And Today

Klaus used other photos from The Beatles taken between 1964 and 1966. If you look closely at the cover, you will even find a photo of the artist himself hiding in his buddy George’s hair along with his name, Klaus O. W. Voormann.
Voormann was nervous when he brought his new creation to The Beatles at Abbey Road

Studios. “I put it up on the shelf, and there was silence in the room.  I was shaking. Then they came over and started talking details and the ice was broken and I was so happy.” Paul remembers that day, “ It was very exciting to see the drawing. It was, ‘Wow, what a great cover!’” “And that…”, says Klaus decades later,  “…made me so happy.”

The album sold well with heavy airplay.  However, one cannot help but think this amazing piece of pop art did its job in the record stores grabbing shoppers’ eyes to the latest release by the Fab Four. Upon its release, Revolver

entered at the number one position on both the British and US record charts. It stayed solidly at number one for seven weeks in England and six weeks on the American charts.

After EMI, The Beatles’ record company printed up the album covers, the art work was returned to NEMS, The Beatles management company. Later, when The Beatles moved offices and created their own company Apple Corps Ltd., the art work moved on to Apple. At this point, the trail grows cold, and Klaus Voormann, busy with graphic arts and playing bass in Manfred Mann, did not seek out the return of the artwork at the time.

Flash forward roughly 40 years, Voormann began to wonder about whether the original Revolver

artwork had survived the decades. He inquired discreetly if Apple Corps still had the artwork. They did not have it and had no idea where it might be. In fact, for all anyone knew, perhaps the most famous album-cover art work in the world might have been thrown in the trash years ago… or did it somehow survive?
In October of 2005, I was invited to attend the kick-off celebration of the new Concert for Bangladesh

exhibit at the Rock & Roll Hall of Fame

on the song It Don't Come Easy

, as well as the vest drummer Jim Keltner used at the Concert for Bangladesh

, to be loaned to the Exhibit.

I took along our son Brad, a high school student and bass player at the time. On the way to the event, I told Brad all about Klaus Voormann’s friendship with The Beatles and his bass playing in the concert film we were about to see.
After speeches given by George's widow Olivia Harrison and Jann Wenner of Rolling Stone magazine, the newly re-mastered film was shown. As the lights went down and the film began, coincidentally, Klaus himself came into our row and sat next to Brad. At the party after the film, we toured the exhibit and later Apple’s Jonathan Clyde introduced us formally to Klaus. Brad and Klaus talked about bass playing for awhile. Then Klaus brought up the missing Revolver artwork. At this point Jonathan Clyde said to Klaus, “You should ask Jim to look for Revolver

. He has found many rare items and things over the years. He can find anything.”
At this point, the Rock And Roll Detective was put on the spot and in front of his son. So, I said, “Sure, I’ll give it a shot and try to locate it for you.” This was on a Thursday night. On Saturday, we returned home and I started working the network of rock and roll memorabilia experts, dealers, auction houses and musician friends. At first, I was coming up empty. None of the major auction houses or memorabilia dealers had ever seen the original Revolver

artwork come up for sale. This led me to worry that it might not have survived the Sixties. But then I called my friend Roy Elkins, founder of Broadjam. Broadjam provides web-based promotional tools and services for independent musicians, the music industry and fans around the world.
In a prior career, Roy had worked with a quite a few musicians and managers. On a hunch, Roy put me in touch with Joe Walsh’s former manager. Elkins thought he had heard mention of the original art work in an old discussion with the manager. Roy’s hunch was right on the money. After a brief phone call with Walsh’s friend and former manager, he told me what I thought I would never hear: “Yeah, its hanging in his library, framed. I saw the original Revolver


I could not wait to tell Klaus that something he had been looking for almost 40 years had been found in about 4 days. Needless to say, Klaus was very happy to know his “baby” was safe and in good hands. Klaus had drawn a new version of the Revolver

artwork which contained drawings of The Beatles' four heads, but now added photographs of the many great artists he had worked with as a session bass player. He sent me a copy with his thanks at the bottom. 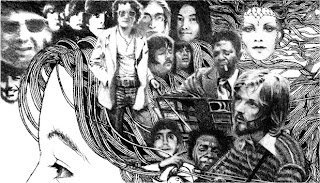 Last year, the Smithsonian Channel broadcast a program about the career of Klaus Voormann called, “All You Need Is Klaus.” In it, Klaus has Ringo Starr playing on one of his sessions for Voormann's Grammy Nominated album, A Sideman's Journey

. Also at the session was Starr’s friend and newly minted brother-in-law Joe Walsh. Klaus finally got the chance to ask Walsh about this most famous piece of art… on camera.

The two musicians have a laugh and get back to their recording session.  How important is Klaus’ cover to the mystique and legacy of the Revolver

album? The album is often cited as one of the greatest record albums in modern music history. Consider that it was voted the third greatest album of the millennium in a British poll in the late 1990s. In 2001, VH1 Network named it the number one greatest album of all time. In 2003, Rolling Stone magazine named the album number three on their list of the 500 greatest albums of all time. And on and on…


Not bad for a graphic artist named Klaus, who by the way, won the Grammy for Best Album Cover for Revolver

And, although the Revolver

cover continues to reside in the good hands of Joe Walsh, at least Klaus knows it is being cared for and appreciated. Of course, Klaus can visit it in LA this February when he returns to the Grammys to pick up perhaps another award.
Thanks to Joe Walsh, the Revolver

original artwork along with other Voormann artwork will be put on public display in Los Angeles at the Biltmore Hotel downtown on February 12, 2011 at 11:00 a.m. Says Klaus, “Joe is game, ain’t that nice.” Yes it is Klaus.

Posted by Rock And Roll Detective® at 8:58 AM 4 comments: