On The Trail of The Beatle Who Vanished: Lunch with a Beatle in London

My trips around London in search of the lost Beatles drummer Jimmie Nicol made me quite hungry. So I decided that it was time to ask a Beatle to lunch one day. Many of you are probably thinking that it was Jimmie Nicol, which would be a logical guess, considering I have been searching for him here in London. I can tell you that the lunch was not with some of the more common Beatles, such as Ringo Starr, Paul McCartney or Pete Best. So, you may at this point be wondering, are there any other Beatles left alive? Yes there is. Here is a clue for you... 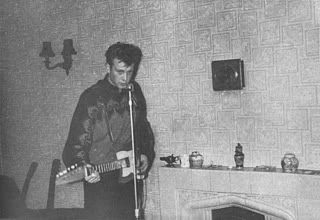 Notice this Beatle, seen here circa 1960 is playing left-handed. Assuming you have not yet guessed, I will give you some more clues. This gentleman played bass guitar with The Beatles in December, 1960, at the Casbah after they had returned from Hamburg without regular bass player Stu Sutcliffe. Stu remained behind to live with his girlfriend and future fiance Astrid. So this gent is the bass player after Stu but before Paul. Give up?

Upon their return from Hamburg, The Beatles needed a bass player for the December gigs. Pete Best suggested his friend Chas Newby. Newby had played in Pete Best's earlier band, The Blackjacks. Chas was home for winter break from college where he was studying to be a chemical engineer. He joined The Beatles for about 3 gigs in December of 1960. Over lunch he told me about one rehearsal where George asked him for help with the chords to "Hallelujah, I Love Her So". Chas recalls, "George wanted to play the same part I was playing on the bass at the same time. So I worked out the chords with him." Below, you can hear an early rehearsal of this song by The Beatles (without Chas).

At the end of December, 1960, John Lennon asked Newby if he wanted to join the group. Chas politely declined. The Beatles were making about one pound each per night. And that is when they had a gig. Maybe 12 pounds per month. "I was getting my entire college paid for by an outside firm and they were additionally paying me 500 pounds per month," says Newby. He had a good deal. Lennon agreed. So Newby went back to college and became a chemical engineer. He would go on to develop the windscreens used to protect our US fighter pilots that are still used today. After retirement from chemical engineering, Chas became a teacher to high school students. In the 2000s Chas built his own custom bass guitar and became a member of the pub rock group The Racketts.

We spent about an hour and a half chatting and laughing. Chas, who had heard about Jimmie Nicol, was very interested in my research for the forthcoming book, The Beatle Who Vanished.  This led to my final question for Chas. Do you ever regret that you didn't take up John Lennon on his offer to be a Beatle? Chas said, "No, I have enjoyed my life and have done what I always wanted to do. He continued, "I have to tell you, my prospects looked a lot better than theirs in December, 1960 (lauging).
We said our goodbyes and took a photo together.
Oh yes, here is a very rare 1960 Hofner Presidential Bass like the one played by both Stu Sutcliffe and Chas Newby in 1960. Only this one is signed by Beatle Chas Newby!

Next time, the Rock And Roll Detective takes you on the hunt for the flat where The Beatle Who Vanished is located. Stay tuned.