The Curious Case of a George Harrison and Bob Marley Collaboration

Over the years a poster has surfaced at nostalgia stores that show George Harrison and Bob Marley together. It explicitly states that the two superstars played live on stage together at London’s Lyceum Ballroom on July 15, 1975. 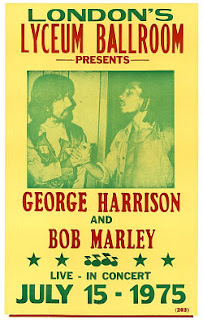 In fact, there are no audio, visual or news accounts of George Harrison ever playing with Bob Marley. Both artists were in the USA and not London at the time. George Harrison had just finished recording the album Extra Texture at the time of the meeting.

Harrison was in fact a fan of Bob Marley and his music; nothing more. On July 13, 1975, George Harrison was invited backstage before a Bob Marley show at the Roxy in Los Angeles to meet Marley.

Here is the photo of the two men meeting backstage. This is the photo that has been used over the years to create the false impression on the bogus posters that the two collaborated onstage together. 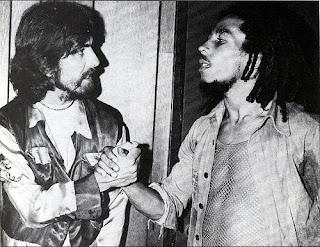 In fact, when Marley was told that George Harrison was coming backstage, he reportedly lit up a joint and exclaimed, “Ras Beatle!” It appears from this next photo that George also got to enjoy a smoke with Bob before the show. 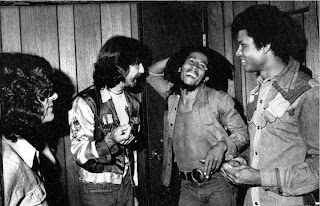 After the two guitar greats expressed their mutual admiration for each other, Bob went onstage to play. 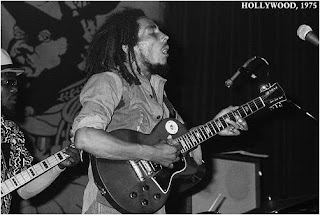 No collaboration took place, but it would have been amazing if had. At least they got to meet.
Speaking of a mysterious Beatle collaboration, The Rock And Roll Detective’s new book,
The Beatle Who Vanished will be available near the end of this month. For release information, go to: www.thebeatlewhovanished.com

Posted by Rock And Roll Detective® at 7:15 AM 4 comments: