The long awaited return of Garbage is finally here! The band that started in the mid 1990s with an innovative sound has a string of hits over a ten year period including: Vow, Stupid Girl, Only Happy When It Rains, Push It, Shut Your Mouth, The World Is Not Enough and many more. Garbage is Butch Vig, Duke Erikson, Shirley Manson, and Steve Marker. They return in 2012 with a new batch of songs that are sure to keep the flames of Rock 'n Roll alive and well for some time to come. I have heard the title track and a few others and you will love this album! 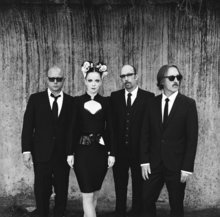 Their new album, "Not Your Kind of People" comes out on May 15, 2012 and the band plans to tour Europe starting out in England on May 9th.

Here is a taste of what to expect from the new Garbage album:

Posted by Rock And Roll Detective® at 10:06 AM No comments: