guardian.co.uk, Wednesday 25 July 2012 05.54 EDT
This article is excerpted from the Guardian.co.uk 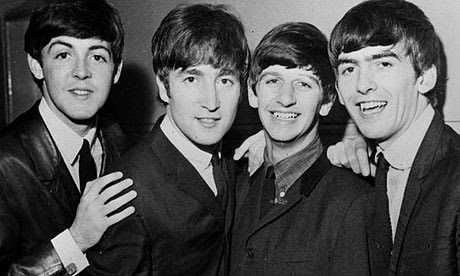 'I have drowned myself in the depth of their catalogue' … Dave Grohl on the Beatles.
The Beatles are celebrating the 50th anniversary of their first hit with a new compilation of songs you probably already own. Tomorrow Never Knows, a "powerful collection … of the Beatles' most powerful rock songs", will be sold via iTunes.
The track-list is not exactly a showstopper. Opening with Revolution, closing with The End, it features 14 tracks from across the band's discography. Nothing here is new or unreleased – nothing is a demo or even a mono mix. Despite the breathless prose of the press release, the only interesting detail is the price: Tomorrow Never Knows costs about half of what it would take to purchase its individual songs.

There are no other plans to celebrate the five-decade mark, according to the LA Times. A spokeswoman confirmed that Tomorrow Never Knows will not be released on CD or vinyl.

The Beatles Use Two Different Drummers For One Audition!

On May 10, 1960, The Beatles, (who were then known as The Silver Beatles), were invited to an audition at the Blue Angel Club in Liverpool. The club was owned by Allan Williams who claims to be The Beatles' first manager. Rock manager Larry Parnes came up from London to audition Liverpool groups and to choose a backing band for his singer Billy Fury, who was planning a tour of Scotland.
Other audition hopefuls along with The Silver Beatles, included: Cass and the Cassanovas, Gerry and the Pacemakers, Cliff Roberts and the Rockers, and Derry and the Seniors.  At the time, The Silver Beatles' line up consited of: John Lennon, George Harrison, Paul McCartney, Stu Sutcliffe (on bass) and drummer Tommy Moore. Unfortunately, Moore was late to the audition when it was time for The Silver Beatles to begin. According to George Harrison, "When we arrived at the club our drummer hadn't shown up, so Johnny Hutchinson, the drummer with Cass and the Cassanovas, sat in with us. I don't think we played particularly well or particularly badly."
What is not known, is that The Silver Beatles' drummer did show up that day for the tryout, marking perhaps the only day in Beatles history, that they used two drummers for the same live performance. Tommy Moore arrived and stepped behind the kit to help The Silver Beatles finish their tryout.
These two rare photos from the same date, show Tommy Moore behind the drum kit playing with John, Paul, George and Stu (who was still learning his chords, with his back to us). According to Paul McCartney, "We had to tell Stuart to turn the other way: 'Do a moody - do a big Elvis pose.' If anyone had been taking notice they would have seen that when we were all in [the key of] A, Stu would be in another key."
One might wonder if John Lennon said to Larry Parnes - at the end of their tryout - the same thing he uttered on the rooftop of Apple, after the last Beatles live performance, "I'd like to say 'thank you' on behalf of the group and ourselves, and I hope we passed the audition." Lennon did take the opportunity to ask the star Billy Fury for his autograph.
On May 18th, The Silver Beatles were informed they would not be chosen to back Billy Fury, but rather another singer from Parnes' stable, Johnny Gentle.  The Silver Beatles would tour Scotland backing Gentle, with Tommy Moore as their drummer.

In an interesting twist, Parnes had yet another band criss-crossing Scotland at the time. The group was called Vince Eager and the Quiet Three. This band contained yet another drummer who would briefly join The Beatles in a few years. His name was Jimmie Nicol.
To learn more about where and when Jimmie Nicol crossed paths with The Beatles, check out www.thebeatlewhovanished.com for more information about the forthcoming book and to get on the email list.

Posted by Rock And Roll Detective® at 2:18 PM No comments: