"Louie Louie", The FBI and the History of Northwest Rock And Roll

No one could really understand the lyrics of "Louie Louie" as recorded by The Kingsman. Except perhaps former FBI head J. Edgar Hoover. He was outraged by the muddled singing. Hoover wrote to one informer (whose name is blanked out in the documents released by the FBI): 'Such material cannot help but divert the minds of young people into unhealthy channels, and negate the wholesome training they have already been afforded by their parents.' Eventhough, the words were indecipherable !

Regardless of what the FBI thought The Kingsman were singing, the irony is, the FBI turned the song into one of the biggest hits in rock history by making such a big deal out of investigating it.

Jerry Dennon was the man repsonsible for getting this song played around the country. Dennon is now the subject of a new DVD documentary entitled “Louie Louie and the History of Northwest Rock & Radio,” recemtnly released March 15, 2012 by SoundWorks USA, Inc., a multi-media entertainment, manufacturing and content company based in Redmond, Wash.


With Northwest singer-songwriter Bonnie Guitar, Dennon formed Jerden Records (using the first three letters of his first and last name). In 1963, Jerden released the now-legendary Kingsmen single, “Louie Louie,” the most popular version of a 1955 Richard Berry song that became one of the most frequently recorded songs of rock ‘n’ roll. (The song is ranked No. 55 on Rolling Stone magazine’s list of “The 500 Greatest Songs of All Time.”)
Dennon's story and the history of Northwest Rock & Radio is a facinating and fun tale of early rock and roll in the wild wild Northwest. Here is the link to the DVD: http://www.soundworks.net/thehistoryofnorthwestrockvol4battleofthebands-1.aspx 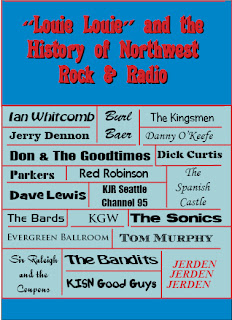